The lake of Sainte-Croix

The lake project was completed in November 1975 and gave birth to the largest lake of the Verdon, with an area of 2200 ha, a length of 14 km and a width of 2 km, it is divided between the Alpes de Haute Provence (04), with the village of Sainte-Croix-du-Verdon, and the Var (83) including the village of Les-Salles-sur-Verdon and Bauduen (where our rental booth is located). Bauduen, "a village... nestled on the shoulder of the hills sheltered from the mistral..." (Giono), is, since the flooding of the dam of Ste Croix, directly located on the banks of the lake.


The lake stretches from the Galetas bridge on the north side, where it is fed by the Verdon through the Grand Canyon (2nd largest canyon in the world after the Colorado Canyon), to the hydroelectric dam at the entrance to the Gorges of Baudinard, on the south side. Giono said about the Grand Canyon: "The birds themselves hesitate to dash from one side to the other over this void where the life of the cosmic powers slowly moves".


The dam supplies several of the neighbouring towns with electricity, producing more than 150 million KWh per year.


The beauty of the lake makes it a great tourist spot, especially in the warm season, whether for the many hikes that overlook it or for a simple ride in an electric boat (only type of motorization allowed) which will certainly end with a swim in its turquoise waters! 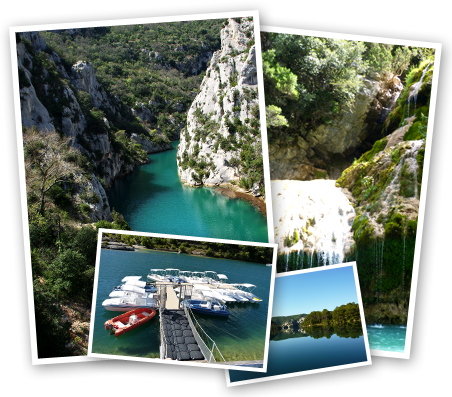 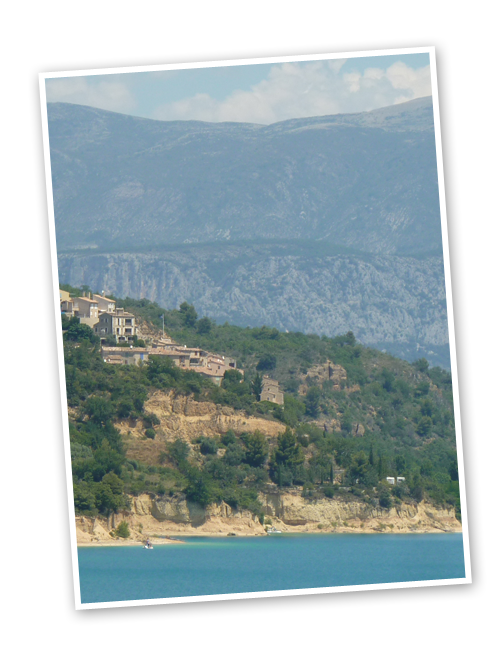 All started in 1908; Georges Clemenceau who was then President of the Council, was already considering adapting the Verdon and building dams at strategic points on the river.

But history decided a different way and the project was put on hold without being totally abandoned!

In 1962, the project reappeared. It consisted in creating a "big lake" up to the 500 coast, which of course included drowning the village of Les-Salles-sur-Verdon, which was located at the bottom of the valley, but also the villages of Bauduen and Sainte-Croix-du-Verdon which would become uninhabitable!

But, in 1968, facing the unabated resistance of the three villages inhabitants, the shoreline chosen for the future lake was lowered to 482, which would allowed the villages of Sainte-Croix-du-Verdon and Bauduen to be spared; only Les-Salles-sur-Verdon would be swallowed up with its memories and the regrets of the villagers, as well as the Garuby and the Aiguines bridges, many caves belonging to the Paleolithic and Fontaine-l'Evêque! "Located on the left bank of the Verdon, 6km south of Les Salles-sur-Verdon (in the commune of Bauduen), the place known as Fontaine l'Evêque was a haven of freshness, a heavenly oasis in the heart of the valley".

The "Vaucluse" resurgence of Fontaine l'Evêque had a large flow, in all seasons, in order to irrigate the downstream orchards. Fontaine-l'Evêque was a world-famous place and had been receiving many visitors for a very long time. At the end of July 1973, the inhabitants of Fontaine l'Evêque had to evacuate the place after a last vain attempt at resistance.

In August 1973, the flooding of the reservoir started and the valley of Les-Salles-sur-Verdon and Fontaine-l'Evêque were submerged forever! The project was completed in 1975.

The most beautiful places


From the creeks around Bauduen, if you take the direction of the dam (while respecting the EDF signs), you will sail "above" Fontaine-l'Evêque (former oasis of freshness for the farmers of the valley, when the dam did not exist). Then, you will end up at the foot of the village of Sainte-Croix-du-Verdon and will return to the valley and get lost in the waters turquoise vastness of the lake of Sainte-Croix. Allow around 2 hours.


Let yourself be carried away by its various shades of colour, from red clay, to yellow pebbles, to end up in the broken white of the banks of Moustiers-Sainte-Marie. All this blends with the palette of greens offered by the pines, oaks, poplars and willows bordering the lake of Sainte-Croix. To do this, allow 4 hours back and forth, by following the right bank of the lake (in the current direction), that is to say by remaining on the side of the village of Sainte-Croix-du-Verdon.


Discover the island of Costebelle (strictly forbidden to dock there), go around and admire its green landscape, imagine the old village of Les-Salles-sur-Verdon, engulfed under the water and then returned to Bauduen. Allow about 3 hours.


For discovering the Grand Canyon, the higher Gorges-du-Verdon, starting from Bauduen, allow 2 hours to get to the bridge of Galetas, at the entrance of the Grand Canyon. Then, allow around 1⁄2 hour in the gorges. Be careful, it is a very crowded place and, above all, very fragile, respect it imperatively! It is forbidden to accost there. Please respect the signs. Come back by wandering on the lake of Sainte-Croix and enjoy the tranquility and especially the landscape surrounding you! The tour will last about five and a half hours. (Only the Cap 4700 boat is adequate for this last boat ride).

Many other atypical landscapes can be discovered on the lake of Sainte-Croix, by always respecting the place and complying with the prohibitions. 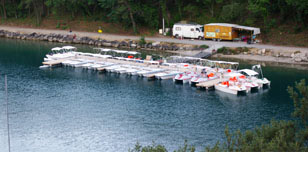 On the lake of Esparron (from June to September) 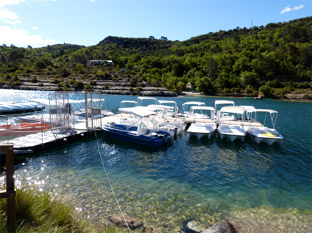 On the lake of Ste Croix (from mid-May to September) 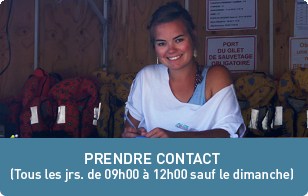